Castilla y Leon is an autonomous region in the North of Spain. The dissatisfaction about the coming together of the two regions dates back a long time and is made clear along the way, where first 'y Leon' is crossed out with graffiti and later 'Castilla' is removed. 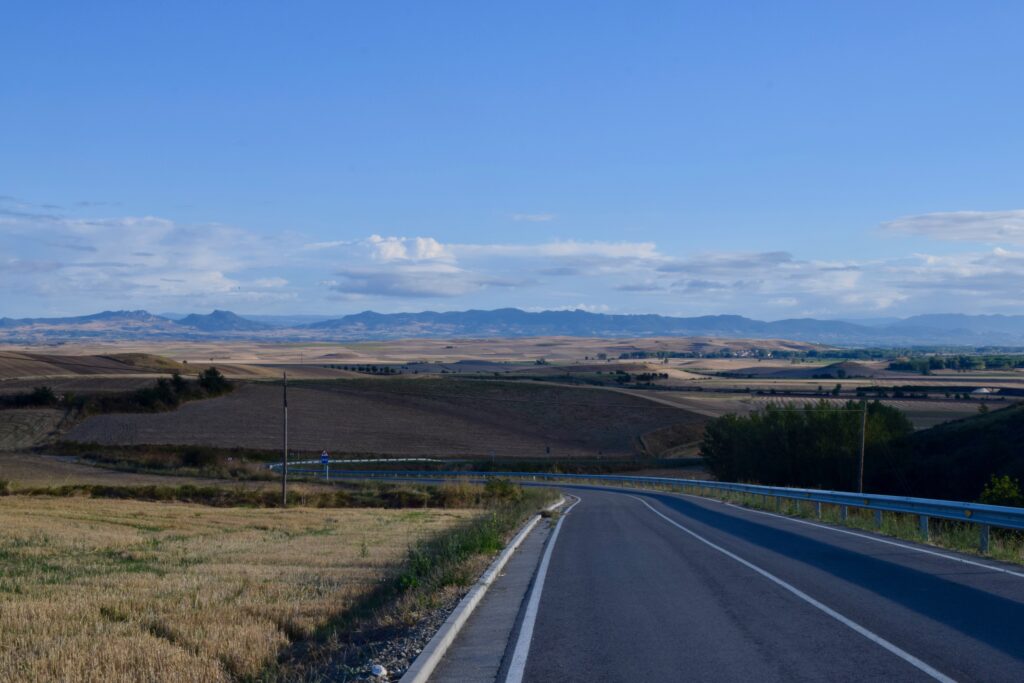 I get to a village with a few dozen parents and kids buzzing around like bees. They come from Bilbao and Burgos, visiting the village where they grew up every year. The kids would much rather live here than in the city, they tell me. But there are no jobs. It's too cold to sleep in the tent so I am brought to a refugio which offers shelter for walkers, sheep herders, travellers, biker girls from the Netherlands.

I wake to the sound of fists hammering at the door. A few men outside yell loudly in the early morning darkness, they shine lanterns through the window of my little house and ask "What are you doing here?". I don't answer, and they laugh, se pasa nada, nothing will happen. They ask to come in but I don't open the door. After a cold eternity they leave me, I glance around at the sheepskin in the corner of the house and the ashes of forgotten heat in the chimney. The walls become visible against the early morning light, wearing graffiti texts of mysteries. 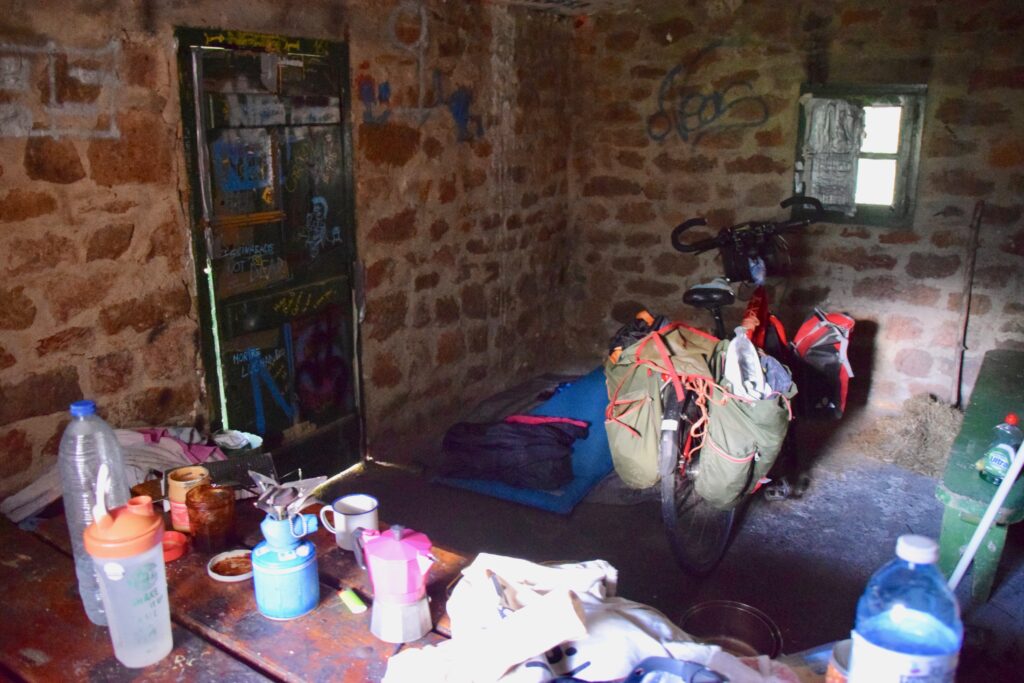 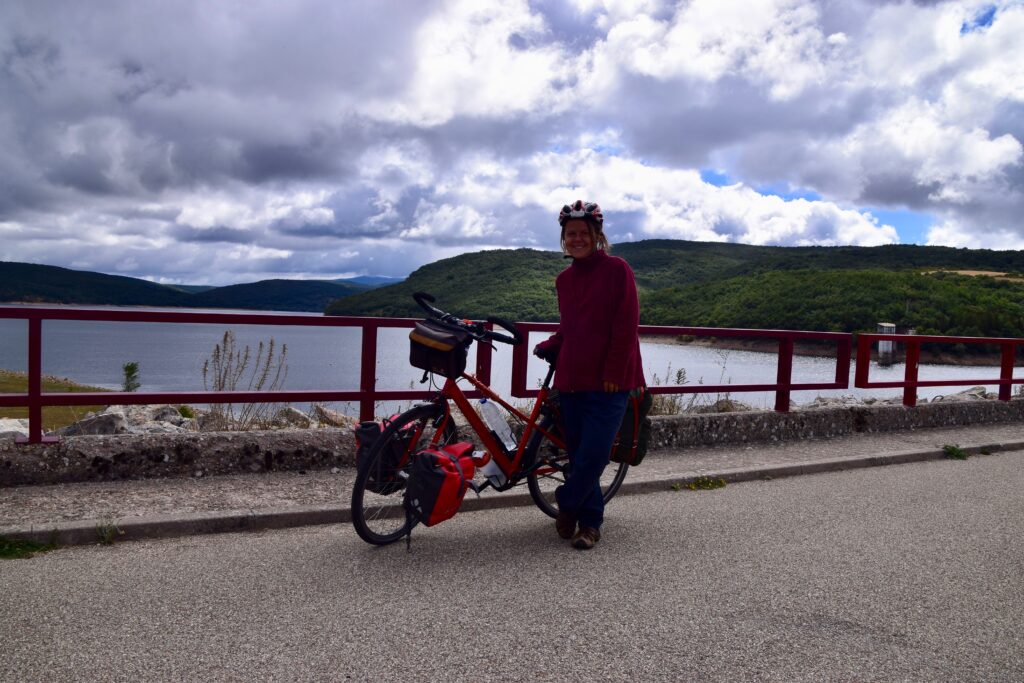 In Burgos I sit on a terrace. The sun has made an appearance and the wind has settled. I drink Calimocho which is red wine with cola, lemon, and ice. People walk around with masks, they cycle with masks, mouths only exist for those who drink. It's calm, Sunday afternoon. People speak quietly as if that too is forbidden. They are beautiful and laugh around. They leave bits of white wine in their glasses when they leave the table. A man asks me for money 'por comer' to eat, a woman asks her son if he has any besos for his father but he does not want to give him a kiss, a man walks behind his wine glass seemingly lost. The city a mosaic of life. 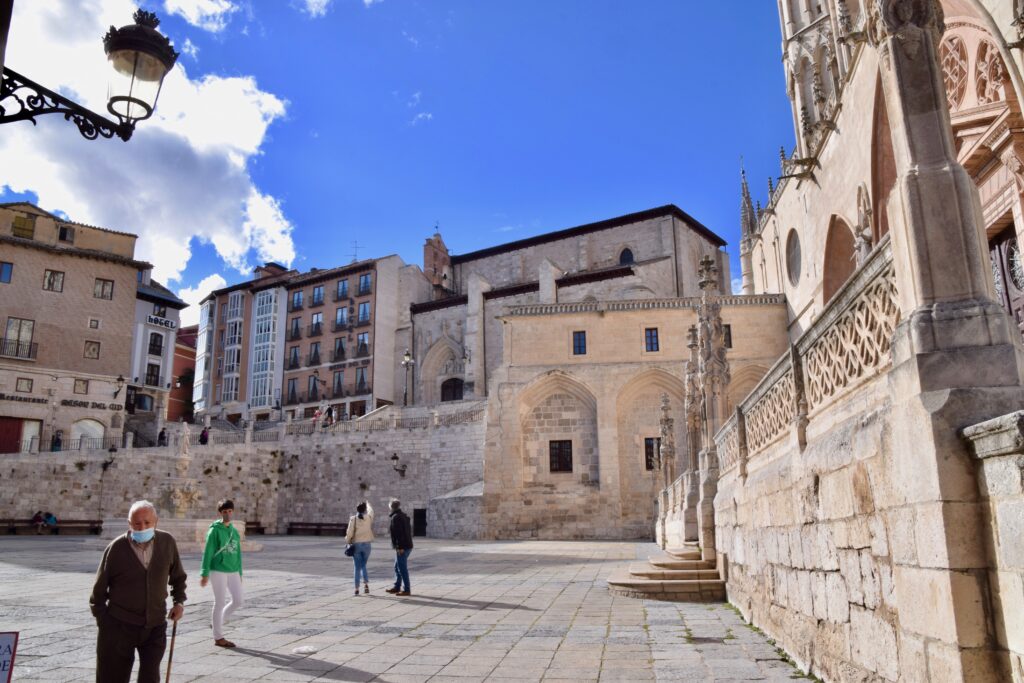 I had not expected this cold from Spain. Nights are tough and I am rather sleep deprived. I stop in a village, Eglesias where Marguerida of 70 lives. She has hundreds of books and spends her days reading and smoking. She tells me about her life in Rome and Milano, her son a beautiful smile on a shelf. She wears large diamond earrings and sunglasses. Hemingway and Bronte and Aristotle fill her shelves, she speaks of them as old friends. She rolls tobacco cigarettes for me and gives me 'non industrial' cookies while telling her stories and laughing. 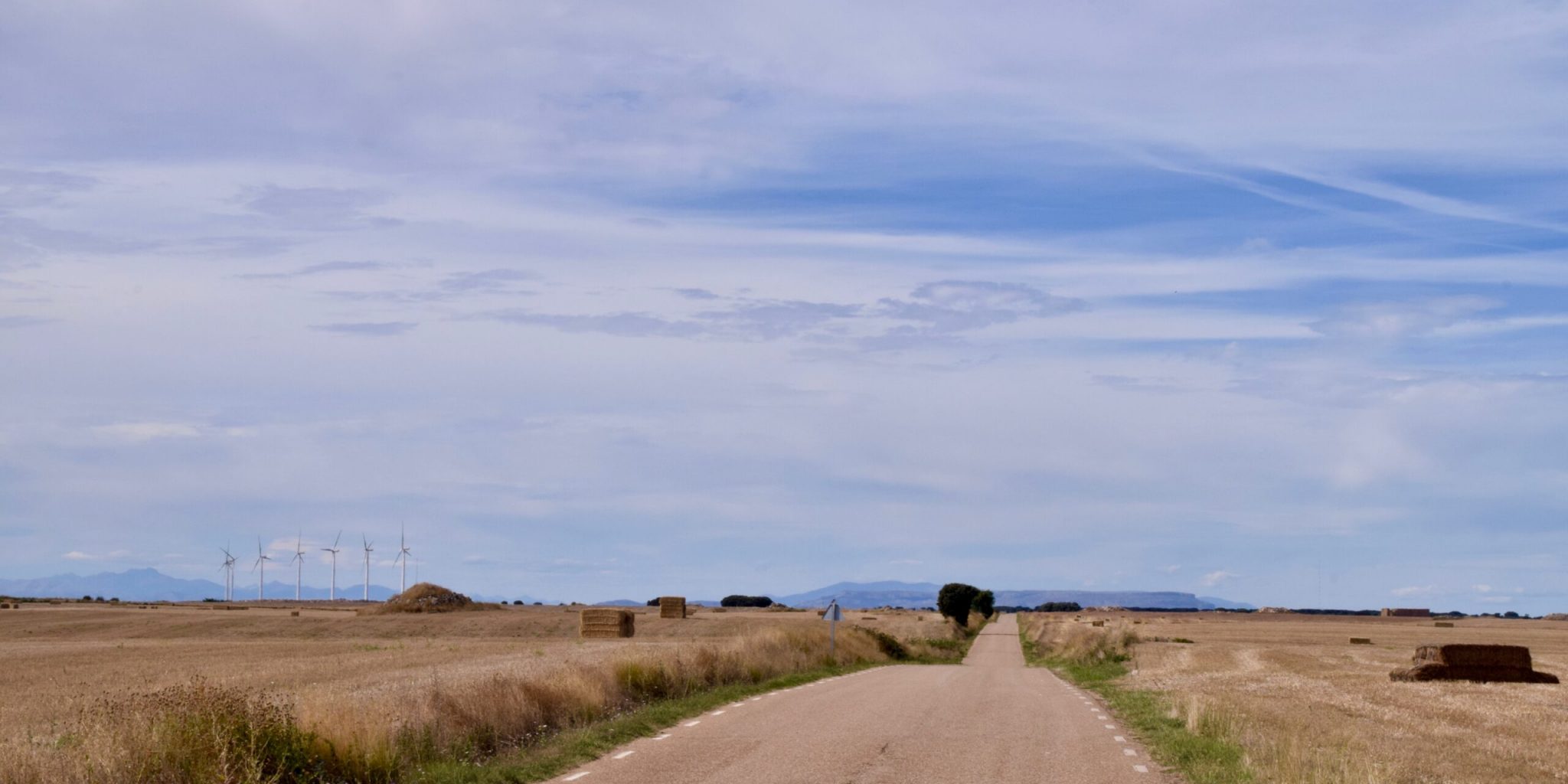 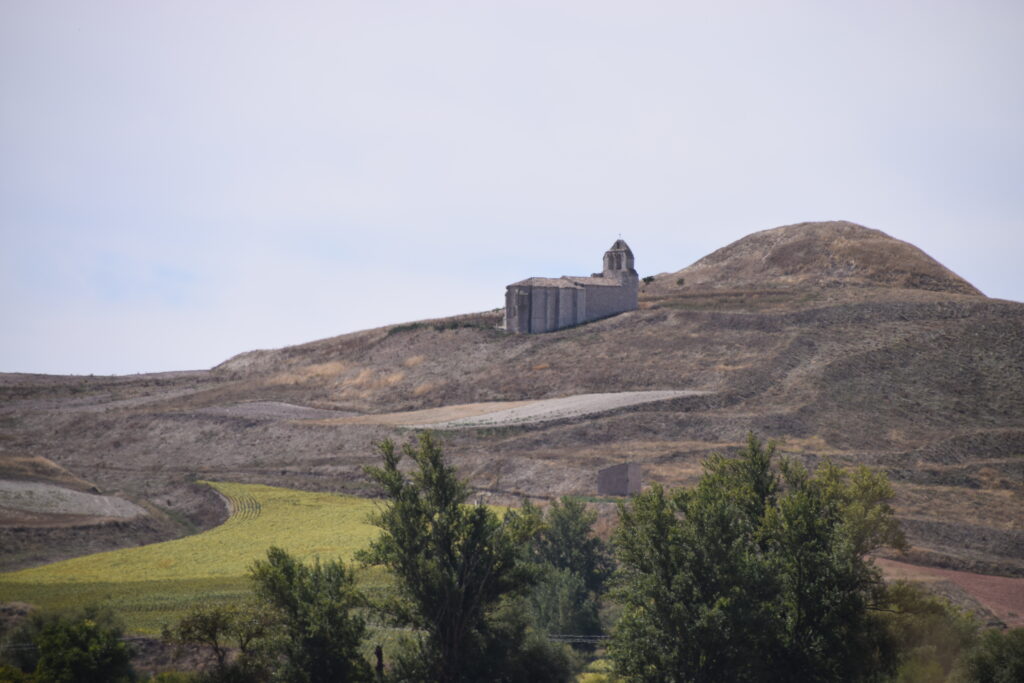 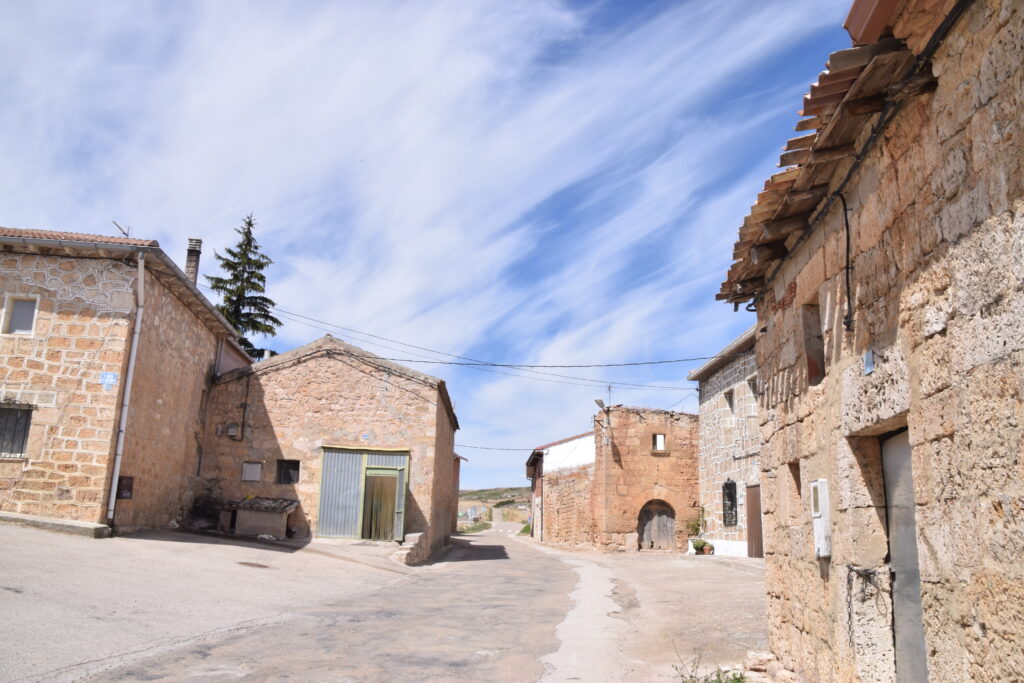 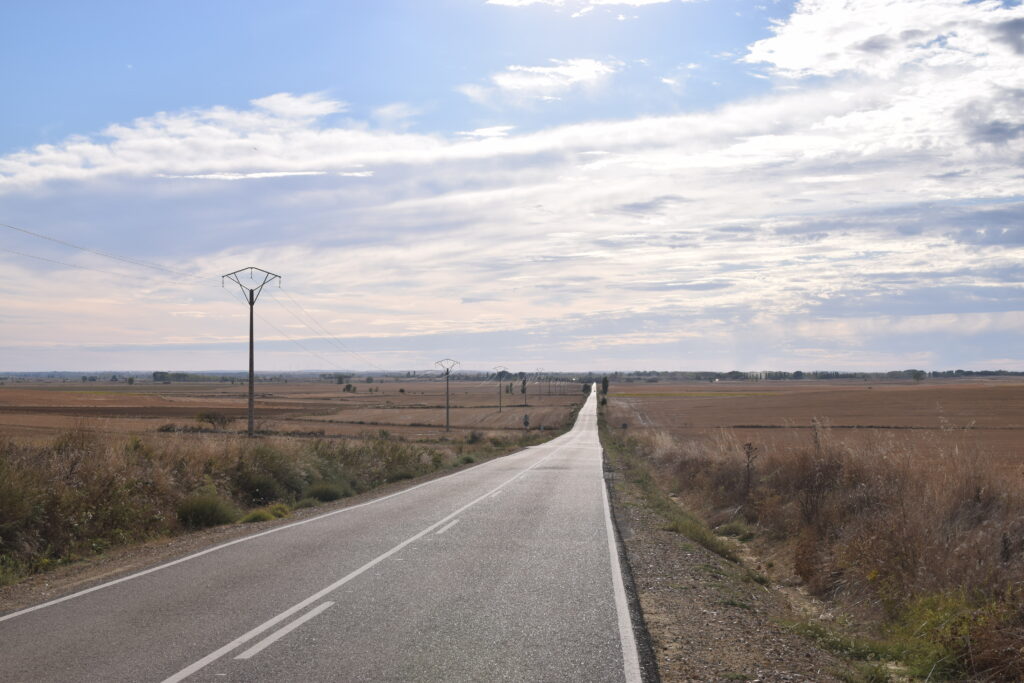 A moonrise is something to witness, and also the only thing that makes my insomnia bearable. She climbs through the trees and paints the sky purple and blue. She shows me the empty page and invites me to fill it.

I had wished so much but I was not able to sleep. At night my feet became stiff under the cold, I hid in my sleeping bag and blew air imitating a heater of some sorts. At seven I wake but outside is crisp and cold and wet. I make coffee in the tent and warm my hands as the fire struggles to warm up the water.

The evening falls and I hurry to get out of the city. In a quiet village I can sleep in the garden of a Spanish family. The kids help me put up my tent. They've never been in a tent so this is a spectacle. I stay until late afternoon with the family, eating drinking and living a life in which you sit and eat while the busy bees buzz around.

I need to climb as never before. There is no way out. 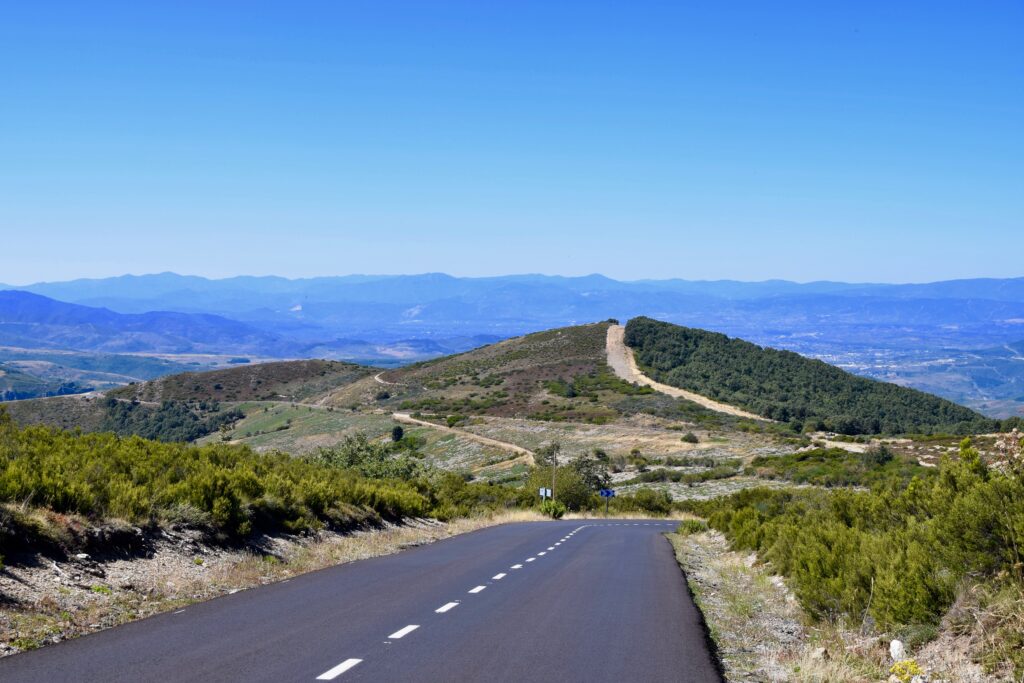 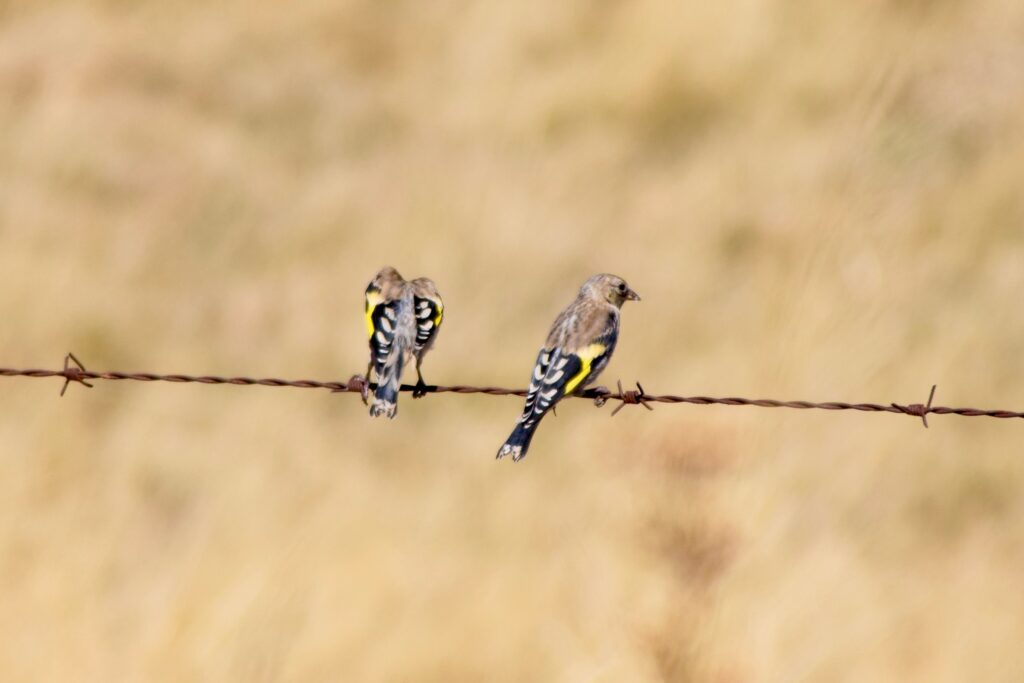 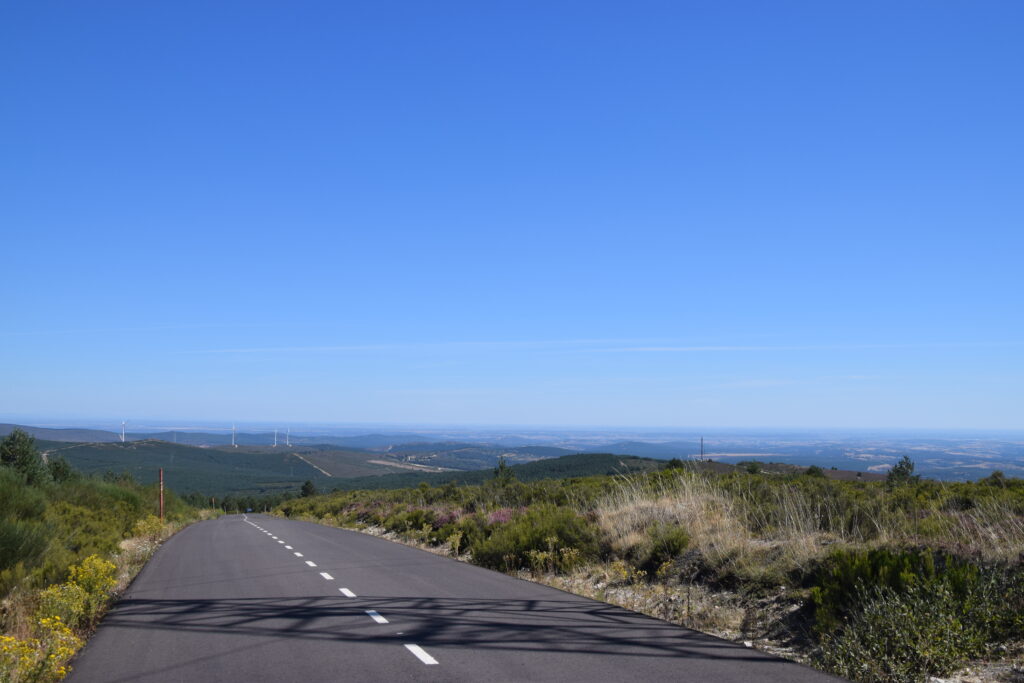 The heat is dirty, the asphalt gives no mercy and the people here are rough. I do not want to be in a city and try to escape Ponferrada. But she is long, her boulevard lined with mega shops seems to have no end. Each time a sign welcomes me to a new village, but it all stays the same. The city with her tentacles through the country-side pulls all under her wing.

It's dry and the heat burns my skin, I want to stop but don't want to stop here. The landscape slowly returns to life and I stop in the first village I cross, Cacabelos. The river invites me, I feel I will collapse soon. The cool water keeps me up and I ask a lady to fill my water bottle before going to the river. She tells me I cannot sleep by the river because of the wild boar. She invites me into her house and we eat lunch and figs and laugh without understanding each other very well.

I sleep a few nights in Cacabelos at Sonia's house. Every morning we drink coffee in the village, where everyone knows each other and a different person joins the table with every cup of coffee served. Sonia takes me to the river where she plays guitar and paints. 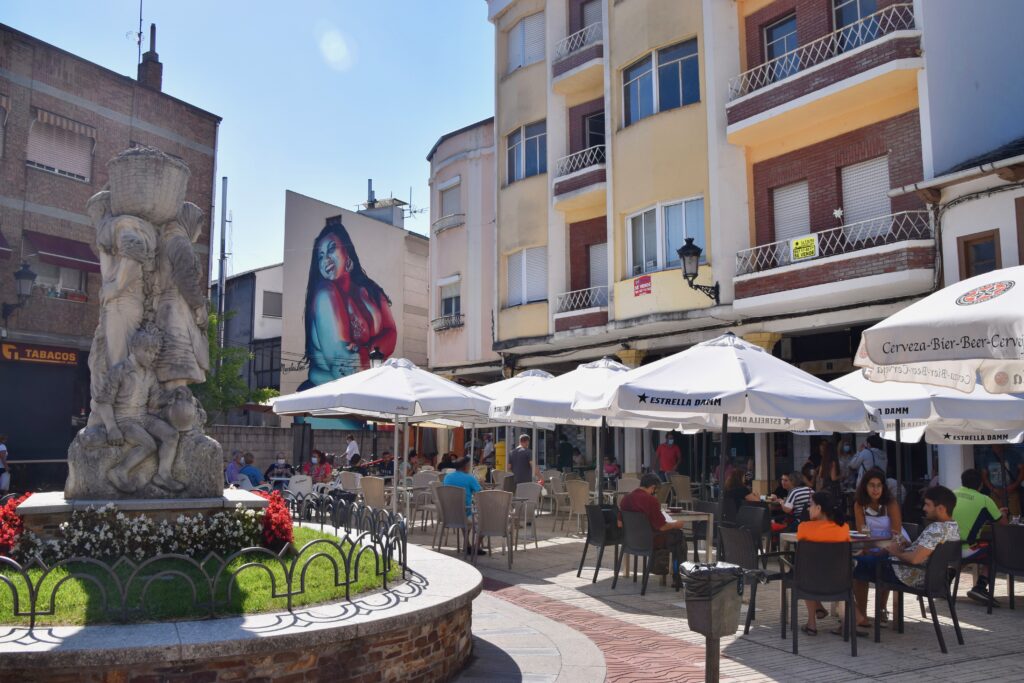 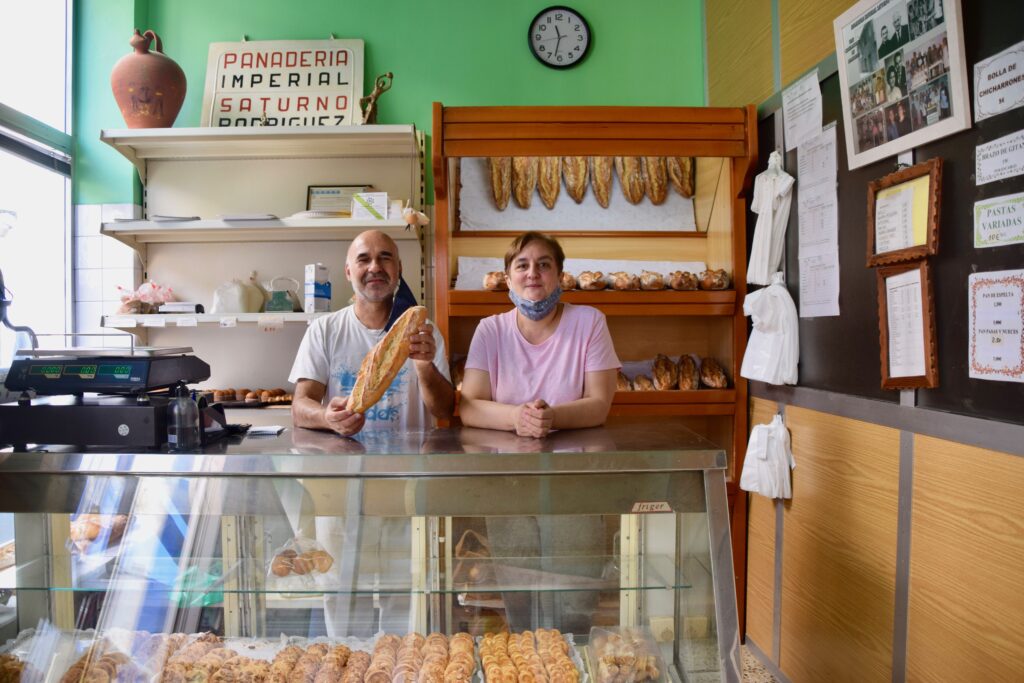 The baker tells me to wait for the new load of breads, "our bread is much better than the French, just you wait" he tells me. His son pours warm apple jelly over the pastry, the bakery connects generations of the family and he will one day run the place like his father does. Back in the village square I meet Sonia's grandparents too, everyone born here and either stayed or somehow have returned. 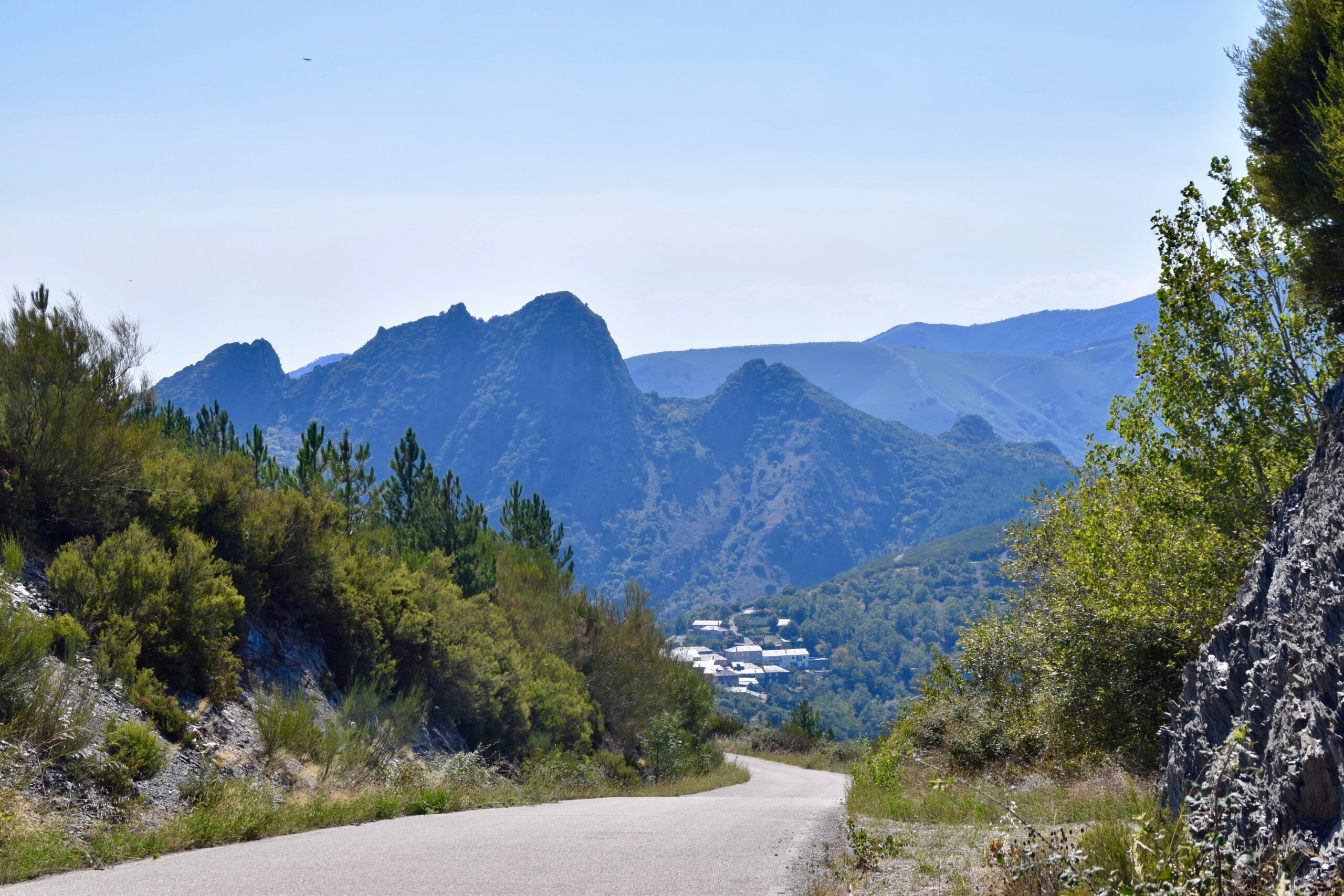 I leave Cacabelos and the people that have become my home, it isn't easy. As I cycle I get closer to myself and the day becomes more walking than cycling. I push my bike up the mountain slope which does not seem to end. Don't expect to get far or get anywhere.

I get water in a village where two brothers play on their gameboys. Grandma comes out and the three of them make a plea for taking the Nacional, the national road. There the slope is doable and I wouldn't have to walk. Feeling illogically strong I stay on the local road, in six hours I meet two cars and the silence is beautiful.

I stop in a village where fifteen people live. Half of them are standing by the communal water fountain. I ask the about sleeping and Juan, a man of eighty wearing blue overalls, shows me four places I can sleep. He introduces me to his kids and his grandkids and cousins. His son works in Ponferrada during the week, "there are no jobs here."

Juan gives me fruit and tomatoes from the garden and a hammer for the pins of my tent. He tells me four times that I really need to do "tok tok tok" on his door if I need anything. Finally they ask me once again if I won't sleep on the driveway. At least there is luz, light. It takes a while for me to understand they want me to sleep under the lantern pole and I ask why I would sleep under a light. "So you can see!"

I wake to a shy sun creeping up above the mountains. From the corner of my eye I see how Juan takes a branch out of a tree and then how he shakily hits the ground with the branch. I figure it's some Spanish agrarian technique and continue to pack. When he gets to me he says shyly that he cleaned the way for my bike up the field. He ties a hay-string to my steering wheel and wants to pull my bike up the field.

A large table of cake and bread and coffee and tea and fruit. The neighbor joins us and tells me I must visit again soon, with my 'madre'. Maria, the wife of Juan, takes me through the village and shows me many worn down houses. One of them holds large white bunnies in small cages, "para comer" she says, to eat.

I get on the bike, tie another farewell to my heart and leave the warm family behind. Now Galicia starts. 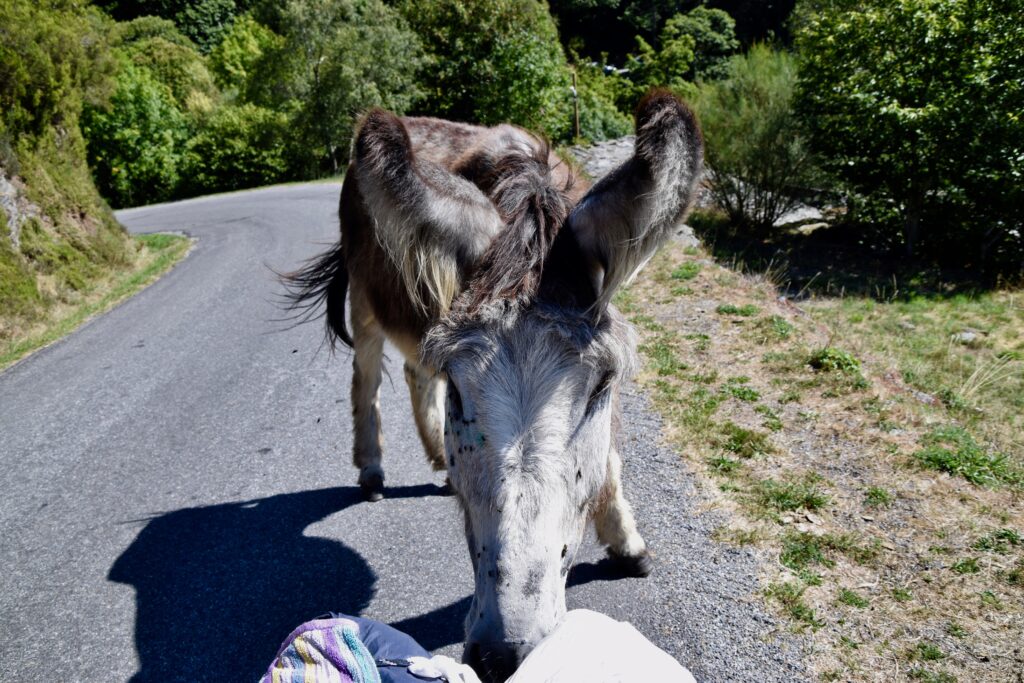 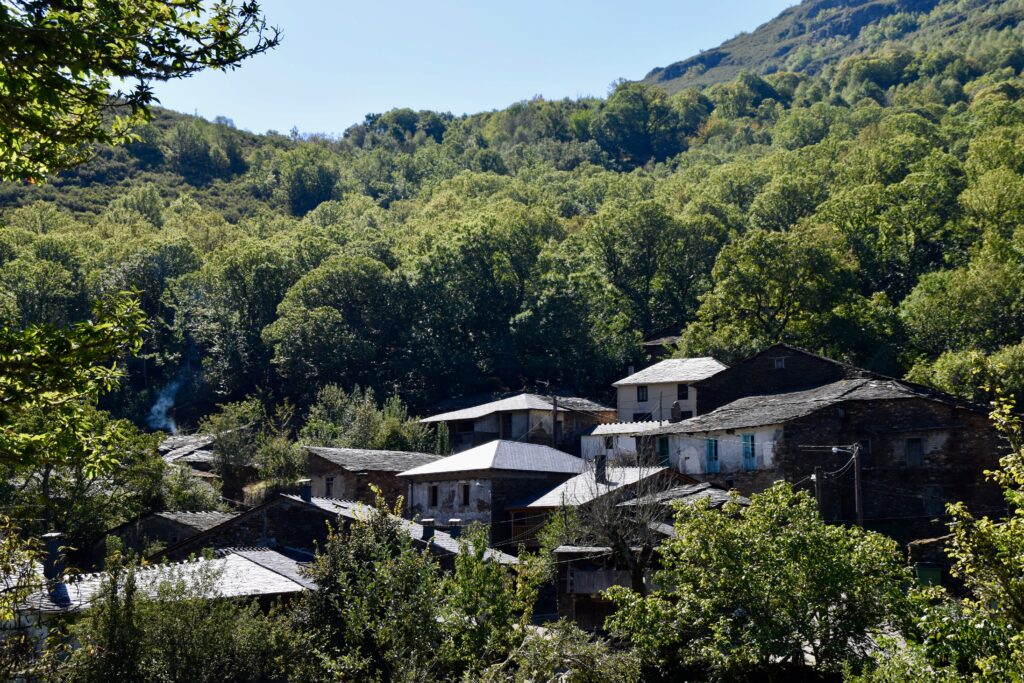 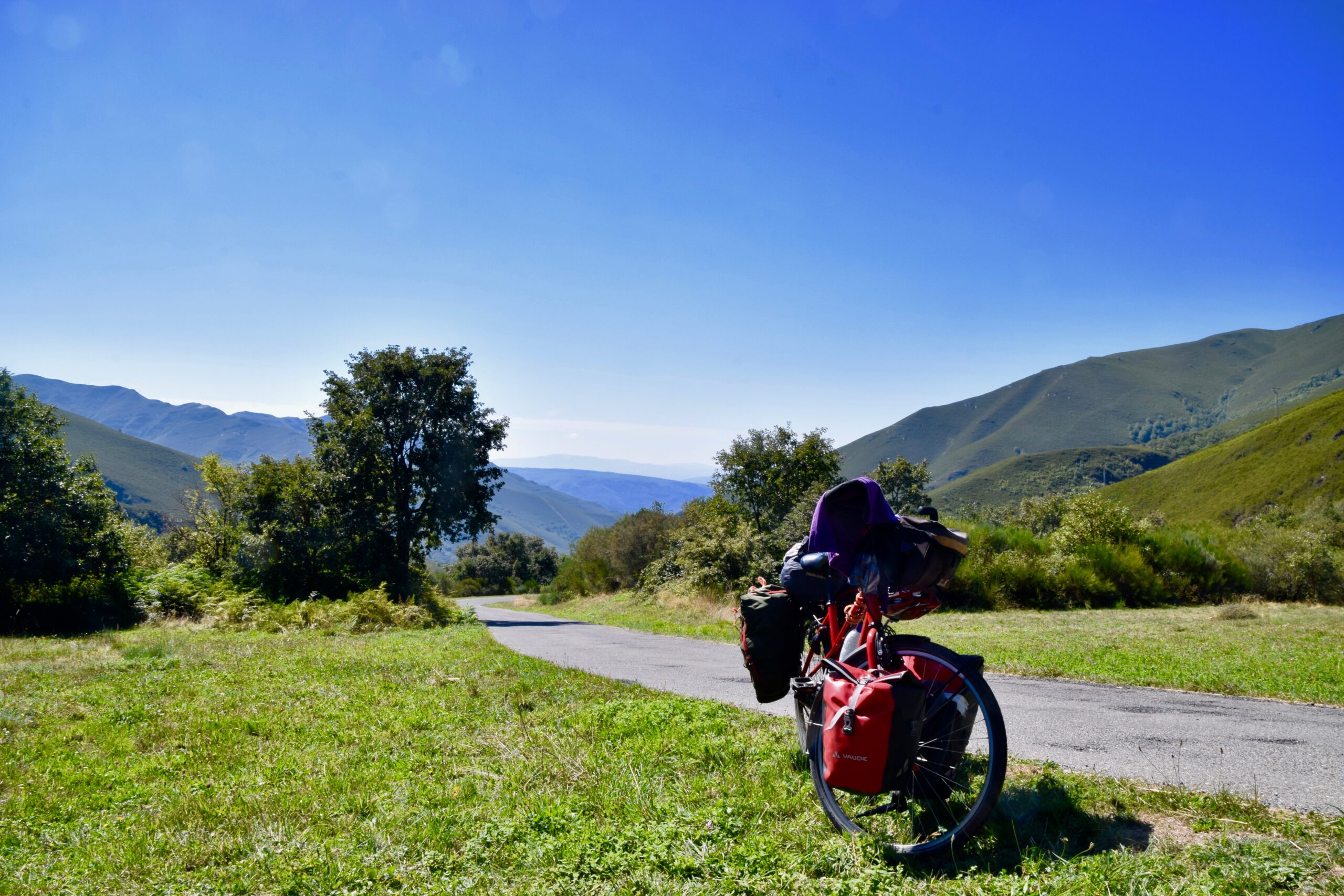